Located in the village of Cuatro Horas, in the Caravelí province of southern Peru, Minera Aurifera Cuatro de Enerno (MACDESA), is a small scale gold mine founded in 2004 through the federation of 478 artisanal miners. 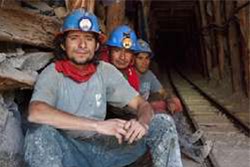 Today the mining cooperative has 388 shareholders, divided into four groups of independent producers. In addition, MACDESA has partnered with other groups of miners, and collaborates with a group of female miners. In all, more than 550 families live off of the MACDESA mine.

MACDESA received Fairtrade certification in May 2015 after several years working to achieve the Fairtrade Standards. Being Fairtrade certified means that on top of the guaranteed minimum price for their gold, the miners get paid an additional Fairtrade Premium to be invested by them into development projects that directly benefit the mining communities.

Rising incomes through sales of their gold on Fairtrade terms has come at a very good time for MACDESA and their local community as 90% of the village, including homes and livestock, was destroyed by a fire occurred in July 2015. The money generated by their Fairtrade sales is invested in rebuilding the local school, housing and providing health care provision in order to help restore the damage done by the fire.