Kuapa Kokoo, which means ‘good cocoa farmer’ in Twi, is a cocoa cooperative located in Kumasi, at the center of the cocoa growing region in the West of Ghana. 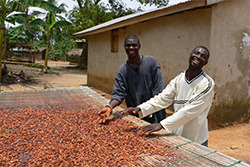 The cooperative was set up in 1993 by a number of leading cocoa farmers who recognized the opportunity to organize farmers and found a company to market their own cocoa. The co-operative is also co-owner of the Divine Chocolate Company in the UK which markets chocolate products made from cocoa grown by Kuapa Kokoo.

Kuapa Kokoo now represents around 100 000 small-scale cocoa growers. The cooperative has invested heavily in women’s empowerment, including a participatory decision-making process that has enabled female members to take up positions of responsibility in the organization. At the moment about 40% of members are women.

Kuapa Kokoo’s partnership with Fairtrade is helping develop a strong, democratic institutional framework at all levels of the organization. With the additional income from Fairtrade Premiums, the co-operative has been able to improve the livelihoods of its members by investing in organizational strengthening and funding community projects such as building of schools, construction of boreholes, extension teams, and establishment of credit unions to give loans to farmers, among others.The projects undertaken by Kuapa Kokoo have helped the farmers, especially the women, empower themselves, build confidence and independence, and ensure a sense of community participation and ownership.